Time flies when you're having a good time. Right? This year has been one of the most amazing of my life. I have pushed myself in ways that I thought were beyond my limits, both emotionally and physically. I grew A LOT. I messed up A LOT. But at the end of the day, this year has been nothing less than amazing.

I love looking back, to an extent. While I never want to dwell on the past, I do enjoy taking a moment to go through pictures, connect with old friends, and relieve the awesome experiences that I have had over the year.

In 2019 I turned 30, hiked the Pacific Crest Trail, went to three new countries, and met more people that I can count from all around the world. So obviously I want to spend some time reliving the amazing year that I had.

And while the adventures were amazing it would not have been anything that great with out the people I got to share the year with. From my family to my trail family and everyone in between there are too many of you to mention. But thank you for leaving a mark on my heart.

I started the year off with a two and a half week vacation around the world. Literally. I flew to Paris for two days before heading to India for two weeks and then back to LA via Hong Kong. It was so amazing to see Paris where I learned very quickly that I cannot speak French, even after five years of trying to learn in (over a decade ago). I simply loved seeing all of the popular sights but my favorite was the Centre Pompidou. While I loved the classics of the Louve (specifically Winged Victory of Samothrace), I love modern art, and therefore the Centre Pimpidou was where I spent hours and hours.

I could have spent a week in Paris but nevertheless the trip to India was simply amazing. It was a trip that pushed me out of my comfort zone. From landing in Mumbai to leaving in Delhi and everything in between it was a trip that I will always cherish. I will forever be grateful for my guides Nano and Krishna and specifically our trip to the Dhavari Slum where I saw a world that, until then, was beyond my wildest imagination. The people of Dhavari were welcoming, beautiful, kind, hardworking people and I will never look at that community the same way.

Beyond that experience, I loved all of the cities and how different they all were. From Udaipur to Jodhpur to Varanasi, the trip was everything that I hoped it would be. I also loved and miss my fellow travelers on the journey: Marie, Ian and Kingsley who were so wonderful to spend the two weeks with.

Yeah, not a whole lot happened. Work go the better of me. Oops.

I was super lucky to have some of my best girlfriends come out to Santa Fe for a girls weekend. We ate, we hiked, we ate some more, it was a quick trip but we loved staying at an old Route 66 motel and hiking in the land of Georgia O'Keefe. I am beyond blessed for Audrey, Maria, and Anna who came out to see me.

I ended March with the annual Father/Daughter Hockey trip to LA. Where we saw some terrible hockey but had some fantastic burgers.

April was probably one of the most insane months of my life. I quit my job, which was terrifying, and started on the PCT a week later. I knew for a while that it was time to make a career change and the PCT was something I had been dreaming about for years. But making that happen was on of the hardest things I have ever done, there was so much "unknown" there was time that I didn't know if I was going to actually follow through with leaving and starting my hike. But alas, I did, and for the next five months, I hiked.

May was filled with the Southern California desert. From the trail towns of Wrightwood, Idylwild, and Big Bear. To some of the most well known trail angels at Hiker Heaven and Casa de Luna, May was all about getting those trail legs and learning how to hike 20+ miles a day. I summited Mt San Jacinto and Mt Baden Powell and ate the most wonderful McDonald's at Cajon Pass where my non trail friend Justin came to say congrats. '

June started of with my 30th birthday, where my trail friends Bart and R2 threw a great party with the help of some Trail Angels at Walker Pass. This was followed by four rest days in Kernville where I managed to white water raft for three of them. Talk about a birthday bash. June was also when I entered the Sierra with my trail family, made it to the summit of Mt Whitney and over Forrester Pass (along with the other fantastic passes of the Sierra).

By July I was with my trail family that I would finish the journey with, Diamond and Big Gulp. We spent the 4th of July in Mammoth, saw the fireworks over Mammoth Mountain, hiked thru Yosemite, and left the Sierra. Thanks to Diamond friends, Shelly and Vinnie, we headed to Reno for a weekend of amazing hospitality and a whole lot of fun. It's impossible to say just how scenic the trail was during July, and I miss those days constantly

By August we entered NorCal and the Cascade Range that we would follow all the way to Canada. We cruised through NorCal passing Lassen Volcanic National Park and then spending 400 miles or so walking around Mt Shasta. Then after months of walking around in California we finally made it to Oregon.

The first part of Oregon was magical mainly because I finally made it to Crater Lake National Park. It is simply stunning. I also raced to Shelter Cove to meet Audrey and Anna for an overnight backpacking trip (Audrey's first) where we spent the night at the beautiful Rosary Lake. I am so grateful that they made the time to come visit me on trail. It will always be a weekend that I hold near and dear to my heart.

In September, the trail family kept walking. We raced through norther Oregon and I fell in love with the Cascade Peaks that lead me north. From the Sisters to Mount Jefferson to Mount Washington to Mount Hood, I fell in love with these Mountains. I was so grateful that my college friend Mailene and her husband Alex welcomed Diamond, Big Gulps and I, into her home with open arms when we were in Portland. Talk about amazing friends.

After Portland we set off for the last 500 miles through Washington. Where it rained and rained and rained. But it didn't stop us from cherishing the last few weeks on trail. We took advantage of the sunny days and enjoyed the last few stops (some of my favorite) along the way. Then on September 27th I finished the 2650 miles of the PCT. I was lucky enough to be greeted in Canada by my parents who took the trail family to Vancouver and then Seattle

October was a month of adjusting. After an attempt of the Arizona Trail, I started to get back into the swing of life. I found a full time (but temporary job) to get back into job search mode. I also explored Phoenix with my Parents which I am currently calling home. I my friend Steph was in town for residency interviews and we got to catch up! My parents and I also took a trip up to Page and explore the northwest corner of the state which was a nice couple day getaway.

As November rolled around I started the month with a trip to good ole stinkin' Lincoln to celebrate Audrey's cat, Hati, 3rd birthday. it was great to catch up with her and other friends in Lincoln. I stopped by swim practice to catch up with my old coaches, and saw Katerina (our dive coach Natasha's daughter) who I taught to swim 8 years ago!

I also made time to go to Denver to visit one of my best friends, Julie, and her wife Bridget. We went to a book ready, orchestra concert, and she made the best dinner and desert. I also was able to sneak away to Leadville, CO to pick up a brand new Melenzana fleece which I have been living in since I bought it.

After Denver, I went up to THE GRAND CANYON. I did a lil' 16 mile run because I needed to be at the Canyon. For me, it is one of the most important places on Earth, and I needed to spend the day up to reset my mind, body and spirit.

I finished up the month with Thanksgiving celebrations where my Grandma came to town along with my Aunt and Uncle, and my cousin and her family. It was a blessing to be able to spend time with the Jones side of the family. 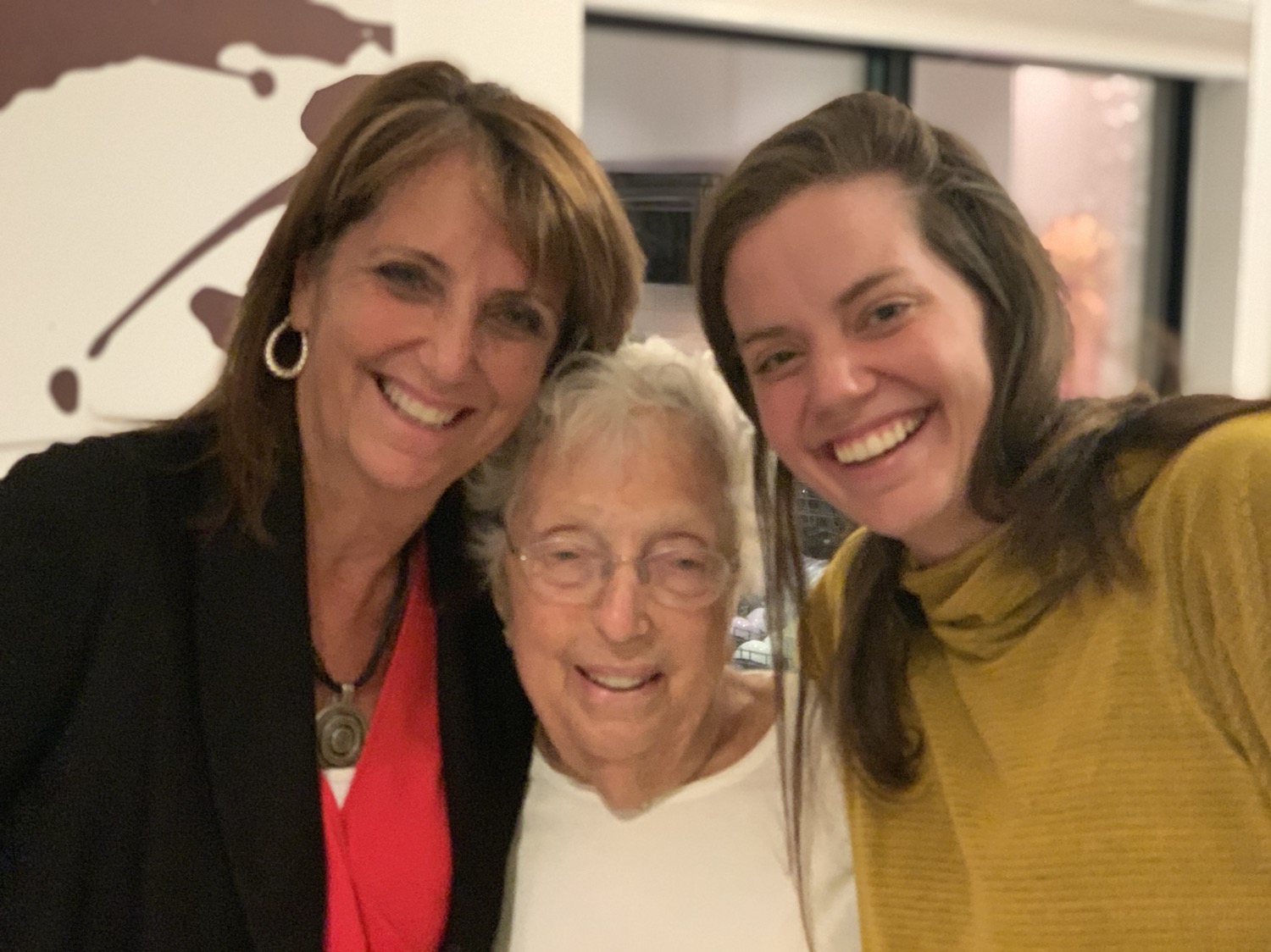 I finished up the year by running in my first 25K, where I totally biffed it around mile 6 (of 16) and came in under my goal time of 3 hours. I am pretty jazzed for my next one in March to see if I can get down around the 2:30 mark). Only time will tell.

We did a family trip to celebrate Christmas. Starting in Vegas for the International Swim League Championship, the fun never stopped. We went to the Neon Light Museum and a Cirque Show. After Vegas we went up to Zion and Bryce to do an into to southern Utah trip for Christmas. It was a great few days getting away to America's best idea (the National Parks).

There is nothing planned for NYE this year (shocker), but I got something up my sleeve to ring in the New Year and the New Decade. Hopefully, your 2019 was amazing and you're 2020 will be even better.